This week, on 7 August 2016, the supreme court of Israel brought to an end the trial of the Kafka manuscripts. Decades after the author’s death, they will no longer be lost to the world.

During Franz Kafka’s lifetime, a tiny fraction of what he had written was published. Metamorphosis came out in 1915 and, later, a few other stories, too.

The Czech writer left his manuscripts to his friend Max Brod. Like Kafka, Brod was part of the German-speaking Jewish community of Prague. Kafka left explicit instructions as to what Brod should do with the stuff. “Dearest Max,” he wrote. “My last request: Everything I leave behind me … in the way of diaries, manuscripts, letters (my own and others’), sketches and so on, to be burned unread.”

Max Brod did not abide by his friend’s wishes. Kafka also left around 20 notebooks and 35 letters in the possession of his last lover, Dora Diamant. She didn’t abide by his wishes, either.

Brod pretty smartish brought out print editions of the novels that were now in his possession. The Trial came out in 1925. This book tells the tale of Joseph K, who is accused of a crime which is never explained and tries to defend himself in a system that is nothing but nightmare. In 1926, Brod published The Castle, which introduces us to another faceless, incomprehensible, dominating bureaucracy. As the twentieth century began introducing the world at large to various incomprehensible, dominating, bureaucratic nightmares, Kafka’s writing resonated with readers. We knew this world. We knew it made no sense. We knew it was cruel. We knew it was pointless to complain. Without Max Brod, we perhaps would not have the perfect word to describe this world: Kafkaesque. (The adjective continues to be useful: it was recently conscripted as an episode title in Breaking Bad.)

“For the proceedings were not only kept secret from the general public, but from the accused as well.” My own undergraduate highlighting of one of the most puzzling puzzles of the process.

So, some of Kafka’s work was published but some of his manuscripts got “lost”. Not lost in the traditional sense of being stolen, eaten, or burned. Lost in the sense that people knew roughly where they were — in an apartment in Tel Aviv surrounded by hundreds of cats, in a Swiss bank vault, or in the hands of the Gestapo, for example — they just couldn’t get their hands on them.

Because the story is so complicated, I’m splitting it into two parts. This is the tale of Max Brod’s suitcase. In another entry, you can read about Dora’s purloined letters.

In an episode worthy of its own television drama, Brod fled Prague the night before the Nazis invaded the city in 1939. He stuffed a suitcase with Kafka’s papers, snuck through the Czech border just before it was closed, and eventually settled in what became Israel.

When Brod died in 1968, he left the Kafka manuscripts to Ilse Esther Hoffe, his secretary and, some say, mistress. When she died in 2007, a legal battle began. Esther Hoffe had sold some of the papers but left the rest to her daughters, Eva and Ruth. Eva and Ruth claimed the papers were therefore their personal property. The National Library of Israel counter-claimed that the papers were the property of the state. Along the way, the German Literature Archive in Marbach, which had paid $1.98 million for the original handwritten manuscript of The Trial in 1988, demanded the right to purchase all the other manuscripts, too, claiming Israel did not have the proper facilities to look after them. (Although Kafka was born in Prague, German was his first language and the one in which he wrote.) The German proposal raised unease in Israel not only because Brod was a Holocaust survivor but also because Kafka’s three sisters were not Holocaust survivors. Elli and Valli died in the Łódź Ghetto; Ottla in Auschwitz. 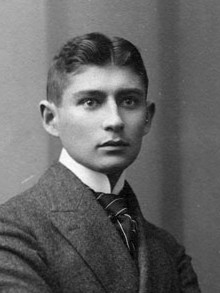 In 2010, a Tel Aviv court ruled that the Hoffe sisters must release the papers for cataloguing. Eva and Ruth were actually proposing to sell them by weight, according to one of their attorneys, Uri Zfat: “If we get an agreement, the material will be offered for sale as a single entity, in one package. It will be sold by weight. They’ll say: ‘There’s a kilogram of papers here, the highest bidder will be able to approach and see what’s there.'” Some wondered whether selling Kafka by the kilo was an ideal idea.

Some were also wondering whether Eva’s cat-infested Tel Aviv apartment was really the best place to store potentially priceless unknown works by one of the most iconic authors of the twentieth century. Some papers were there, but nobody knew which, as Eva wouldn’t let anyone inside. Some were in safety-deposit boxes in Tel Aviv banks, others in four more boxes in Zurich’s UBS bank. During the Suez crisis in 1956, Brod had transferred the most valuable manuscripts to Switzerland for safekeeping. The boxes were finally prised open after the ruling in 2010. Inside were manuscripts, including a previously unknown story, it was said, but nobody really knew what, as Eva and Ruti had filed an injunction to keep their contents secret.

In 2015, the Tel Aviv District Court awarded custody of the estate of Max Brod to the National Library in Jerusalem. At the heart of the decision was Brod’s own will. He left the manuscripts to Esther Hoffe for her lifetime with instructions that she donate the Kafka papers to a public institution on or before her death. Israel’s National Library was at the top of his list of suggested such institutions.

There was, naturally, an appeal but finally, the supreme court of Israel ruled that Franz Kafka’s manuscripts must go to the National Library. At last, in 2016, the door to the law was closed.

What was in those boxes? We still don’t know. I’ll update when we do.