The news caught my eye this week (February 2016) when I learned that the Russian consul in Edinburgh, Andrei Pritsepov, had presented a copy of The Chronicles of Ivan the Terrible to the Princess Dashkova Russian Centre, part of the University of Edinburgh. “How did Mr Pritsepov manage that?” I wondered, given that the news stories also mentioned that this epic medieval manuscript had supposedly vanished and been “lost for more than 400 years“. (You can see what caught my attention.)

The answer took a little finding out.

Ivan Grozny, the first tsar of all the Russias, is perhaps nowadays better known as Ivan the Terrible. “Terrible” might to our modern ears imply that he was a spectacularly bad tsar of all the Russias, losing territories, devaluing the rouble, under-counting serfs etc. Yet, before translation, the word has more of a sense of “inspiring terror” or “terrifying”. Both of which Ivan certainly was. He had laudable triumphs: he commissioned the construction of St Basil’s cathedral and instituted Russia’s first printing presses, for example. He had less laudable moments, too. As well as perpetrating cruel and senseless slaughter in a paranoid campaign against any perceived traitor, he also managed to accidentally kill his own son. 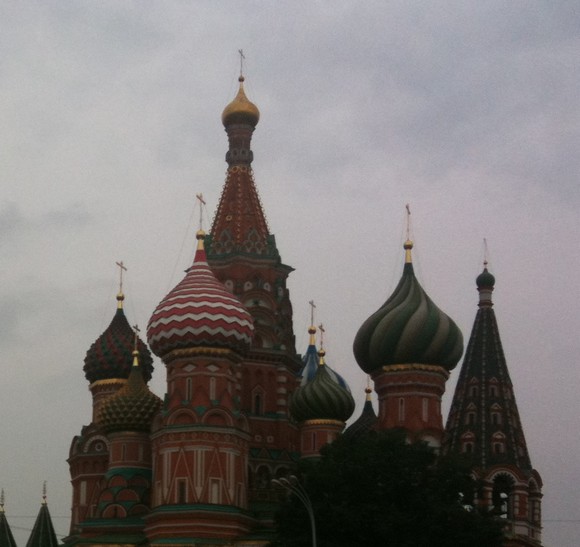 One of Ivan’s better moments: St Basil’s cathedral. (Sorry, it was a grey day in Moscow when I visited.)

When he wasn’t annihilating thousands of innocent people, Ivan Grozny had an eye on the future. He commissioned The Chronicles: a series of handwritten illuminated manuscripts created between 1568 and 1576. The manuscripts were stitched into ten separate volumes. This “Tsar Book”, as it became known, covered all of world history from Adam and Eve to Ivan’s own reign. Ivan intended the chronicles to provide an education for his children; a sort of How to be a better Tsar.

Sadly, the educative purpose failed, despite the manuscript’s 16,000 illustrations. Shortly after Ivan died in 1584, Russia was plunged into a chaos eloquently described as “The Time of Troubles“. The troubles involved famine (about two million people died; one-third of the population), war and general unrest.

Yes, yes, but how does a set of medieval manuscripts disappear for more than 400 years?

The answer, of course, is that they didn’t.

In those troubled times, the volumes of the original work were removed from the Kremlin, separated, scattered in various regions of Russia, but not exactly lost. The Historical Museum in Moscow had volumes 1, 9 and 10. The rest of the volumes lounged in the libraries of St Petersburg. They simply have never been brought together again as one since The Time of Troubles. Until now.

Step in The Society of Ancient Literature Lovers.

The Society of Ancient Literature Lovers has faithfully recreated the Tsar Book as a rather lovely facsimile. The ten volumes in Edinburgh are a newly created copy. Valuable, beautiful, an astonishing gift from Russia; but, despite the original headlines, not the first appearance of the chronicles in 400 years.

Lost Manuscripts: Reporting from the news headlines for you when things aren’t even, it turns out, lost.